Stellar Project is a space technology startup created in 2016 as a spin-off of the University of Padova, Italy, offering game-changing solutions for light satellites with a high degree of care towards space environmental sustainability.

Stellar Project aims to fill the gap in performances and capabilities between small satellites and large spacecrafts, providing original and proprietary technology.

The company vision embraces global space democratization, bringing together the best talent and creativity to develop bright ideas to fit into smart satellites products and services. 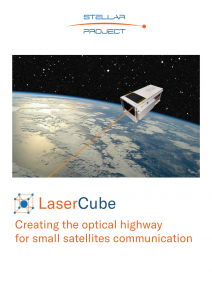 In 2021, Stellar Project will launch LaserCube, a proprietary and patented revolutionary technology.
LaserCube is a miniature low-power, high-performance laser communication terminal specifically designed for CubeSats and smallsats.
With its independent and accurate pointing capability, LaserCube allows throughput performance more than 10 times higher than state-of-the-art radiofrequency solutions for small satellites enabling several innovative business applications.
LaserCube, as the optical telecommunication highway for small satellites, will deliver an unprecedented increase in data volume, communication security, and speed: another step towards accessible and affordable space technology for all.

LaserCube features two different configurations, one for downlink and the other for inter-satellite link applications. The downlink version can downlink data at an unprecedented rate, permitting the full exploitation of optical payloads for high-resolution multispectral imaging; the inter-satellite link version represents a fundamental element to realize high-efficient IoT and M2M networks, as well as spaceborne data relay constellations. The system is composed of two main parts: the optomechanical unit and the electronic unit, each made of standardized building blocks. The former features a dedicated dual-stage pointing system based on a technology patented by Stellar Project and the optical head, while the electronic unit contains the laser sources and drivers, as well as ancillary electronics.
Stellar Project is also working in consortiums within the H2020 program on Quantum Communication and started to expand its activities on data analytics both for terrestrial applications and the space environment providing tools for Space Debris Analysis and monitoring.
Stellar Project offers a unique consultancy service to analyze the risk of mission deterioration for spacecraft and constellations exposed to the current orbital environment, with a special focus on the threat posed by space debris. Environment analyses are coupled with the examination of spacecraft design reports provided by manufacturers, in order to derive realistic predictions and/or assessments of satellite anomalies, useful for the Space Insurance market.
Because of the growing interest in large constellations of small satellites, the risk related to space debris and space radiation is going to be better perceived day by day. The debris population in Earth orbits is in fact continuously increasing, and the robustness of nanosatellites to the radiation, plasma, and neutral environments is still not at the same level as that of large spacecraft. In respect of these threats, Stellar Project provides advice to operators willing to maximize the environmental robustness of their space systems since early design stages.