Tiberlab Srl is a spin-off of University of Rome “Tor Vergata”. Our mission is to develop innovative software solutions aimed to the design and simulation of electronic and optoelectronic devices, focusing in particular on nanostructured devices. Modern nanostructure devices pose new challenges due to the wide range of length and time scale involved. We provide tools for multiscale simulation able to perform analysis and optimization at all the relevant length scales, through state of the art physical models ranging from continuous to atomistic level. Tiberlab offers consulting services and end user software. Our core product is TiberCAD, a software for modeling and design of innovative nanostructured devices. tiberCAD software has been and is presently used as a main simulation tool in several FP7 EU projects, for the design and the study of optoelectronic properties of quantum well and nanowire based LEDs and of advanced solar cells. Tiberlab is presently a partner in FP7 Project Deepen, aimed to the design of an open source multiscale simulation environment for electronics and optoelectronics modeling. 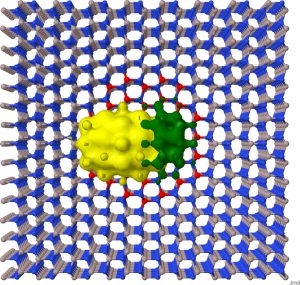 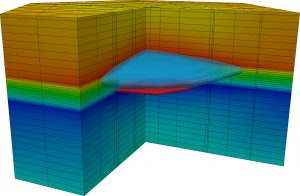 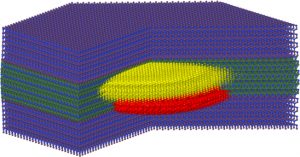 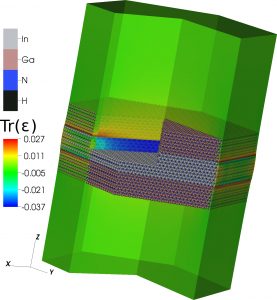 Our software product TiberCAD is a multiscale CAE tool for design and simulation of electronic and optoelectronic nanostructured devices. This simulation software provides novel tools to accomplish the critical requirements imposed by the recent developments in Key Enabling Technologies such as micro-nanoelectronics, nanotechnology, photonics and advanced materials.

Among the applications of TiberCAD are LEDs based on quantum wells and quantum dots, nanowire FETs, III/V heterostructures, photovoltaic cells for space applications, organic solar cells (OPVs), Dye Solar Cells (DSCs), piezoelectric nanogenerators. TiberCAD is a multiscale tool, since it allows the simultaneous solution of physical models on different length scales, ranging from the continuous level of macroscopic device to the atomistic structure of the active region at the nanoscale. The multiscale approach can be employed in several fields such as particle transport, heat dissipation and mechanical deformation. In this way, quantum and classical descriptions can be used in different regions of a device/nanostructure within the same simulation; analysis and optimization may be performed at all the relevant length scales, possibly including selfconsistent coupling of different models, such as quantum, thermal and drift-diffusion ones.

TiberCAD is capable to couple the FEM-based continuous media physical models with simulation models based on quantum approaches in an atomistic framework, such as Empirical Tight-binding (ETB) and Density Functional Theory (DFT) for electronic properties and Non-equilibrium Green Function (NEGF) for quantum transport. Based on the FEM device description and crystallographic orientation, the needed atomistic structure is generated internally in TiberCAD. Then, the atomistic structure is deformed according to the strain obtained from the continuous media elasticity model or from an atomistic approach such as Valence Force Field (VFF). TiberCAD provides models to calculate particle transport and IV characteristics, including strain and piezoelectric effects in nitride materials; a fully 3D quantum model allows to calculate optoelectronic properties at operating bias. Atomistic models for strain and electronic calculations such as VFF and ETB, together with random alloy representations of the active region, allow to study realistic material nanostructures, where the fluctuation of alloy composition may affect in a critical way the properties and performances of a LED or a solar cell. Accurate models for the most important material systems for photonics and electronics applications are provided, such as GaAs/AlGaS and GaN/AlGaN/InGaN. Methods for parallelization of computationally heavy routines for atomistic calculations through Graphical Processing Units (GPU) and MPI techniques are implemented.